A brief history of the matanza

La Matanza: A search for the historical roots of the matanza tradition leads one to around 500BC when Spain was occupied by Celtic tribes. Pigs were known to be important to the Celts who carved granite statues that looked like pigs to be used as tombstones and territorial markers. During the period when Spain was ruled by the Moors (711 to 1492),the matanza took on a greater significance; it became the symbol of political and religious resistance.

The harvest of meat after the pigs have had sufficient time to grow to between 300 to 600 pounds, became an integral part of Spanish culture in every village; a social ritual that transcended its original purpose of feeding us, to he equally important job of preserving and maintaining the life-long bonds of immediate and extended family. Matanzas became the social adhesive, which helped unite and bond together whole communities. 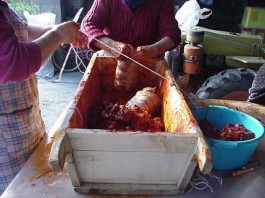 The mantaza is an event where family members are trained and delegated responsibilities based on their age and position in the family unit, beginning with the daily feeding of the pig to the expert bleeding and butchery skills needed on the day of the killing. Almost all the pig is used, from the blood a type of black pudding is made called morcillas. Jamon is a pig leg, hoof and all. Stuffed stomachs (filled with tongue, feet, heart, lungs, internal organs, blood sausage, chorizo, spine, ears and miscellaneous other parts mixed with paprika and garlic). Spanish chorizo is made from coarsely chopped pork and pork fat, seasoned with smoked pimenton (paprika) and salt. It is generally classed as either picante (spicy) or dulce (sweet), depending upon the type of smoked paprika used. 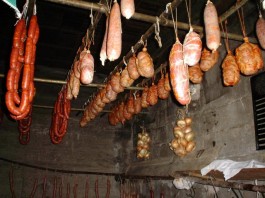 The matanza remains a bridge to the past which connects the present and future generations. Like many other cultural traditions knowing how and where you fit into the chronology of history plays a major role in how we develop our self-concept and sense of self worth.